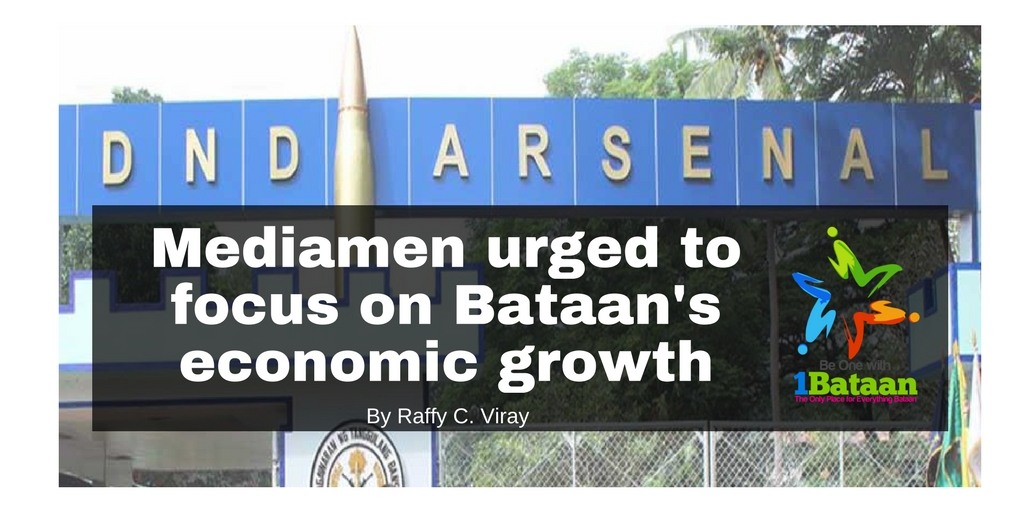 BALANGA CITY, Bataan – Governor Albert S. Garcia is encouraging media practitioners to highlight the remarkable economic growth of the provicne and to focus on the expansion of the country’s first defense industrial complex  located at the government arsenal in the upland area of Barangay Lamao in Limay.

In a press conference held recently at his office, Gov. Abet informed print and broadcast journalists that Ms. Charito Plaza, director general of the Philippine Economic Zone Authority (PEZA) had invited highly-developed countries to construct their ammunition plants in province.

He stressed that under the PEZA plan, the Authority is eyeing the three (3) industrial defense complexes in Bataan, Palawan and Mindanao which are ideally preferable sites to host factories to be built by the United States, Israel, Japan, China, Russia and other countries

The newly-created  industrial defense complexes  could be utilized in the manufacturing  of air and sea craft, firearms and ammunition, combat clothing, drones and everything related to military and police use.

Gov. Garcia added that the conversion of the 370 hectare government arsenal industrial estate in the upland section of Barangay Lamao into the Bataan Defense Economic Zone would hasten the country’s self-reliance posture and to encourage foreign investments to other defense related industries.

It was learned that officials of an adjacent town of the Special Defense Economic Zone in Limay are reportedly offering some 3,000 hectares of land for conversion to a defense industrial complex component.

Meanwhile, Representative Enrique S. Garcia lll of the province’s second congressional district and principal author of the House Bill creating a Special Defense Economic  Zone, said this would become accessible  for  inclusive  business prospects  and  progress  in firearms  module  and technical competency  of the government arsenal that are vital to support the objective  of the Armed Forces of the Philippines (AFP), Philippine National Police (PNP) and other law-enforcement agencies.

The neophyte Bataan solon has positively guaranteed the operation of the Special Defense Economic Zone would accelerate the inflow of top-notch material on advanced weaponry system and the acquisition of sophisticated technology in armament production features.

He recognized the economic impact of the Defense Economic Zone project which is highly regarded as one of its kind in Asia in promoting the indigenous capability in the manufacture of defense armaments.