Invest in Bataan / PNOC  / After 27 years of waiting, 400 families in Lamao awarded with lots
21 Dec
Share 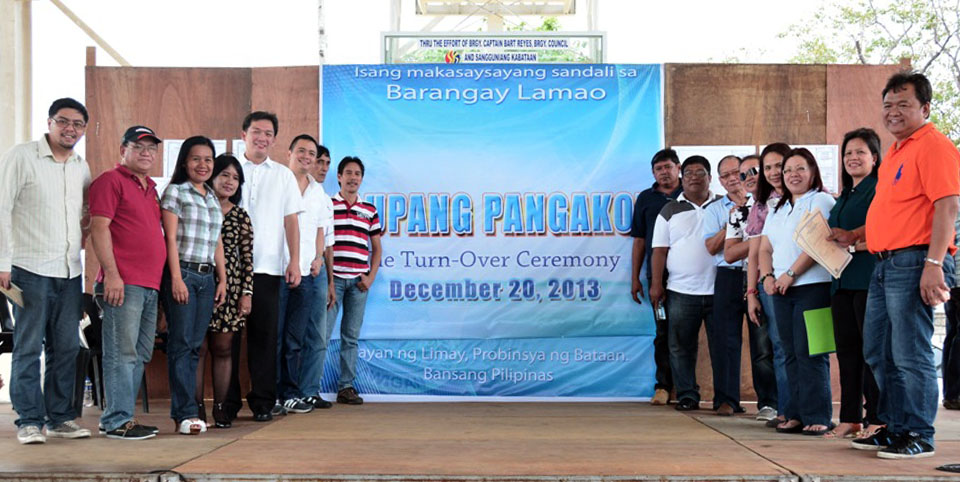 After 27 years of waiting, 400 families in Lamao awarded with lots

LIMAY, Bataan- After 27 long years of waiting, the 400 families in Lamao, this town, can now own their long desired titles of their occupied 10.8 hectares of  government lot.

Residents here attributed their victory to the joint efforts of Gov. Abet S Garcia,  Mayor Ver Roque and Rep Tet Garcia for working hand in hand that resulted to the granting of the said government lot.

“We also want to thank the officials of Phil. National Oil Company for their approval in donating these lots to our constituents who have long been dreaming of owning the PNOC lots,” said Gov Garcia.

Newsmen learned, however, that the donation of the lots was fastracked by the PNOC top officials  who appreciated the efforts of then congressman,  Now Gov. Abet Garcia, who sponsored a law that converted more than 500 hectares of idle lot owned by the PNOC into industrial area, paving the way for its exclusive industrialization.

A multi national firm is now reportedly getting in touch with Gov Garcia, mulling to pour in billions of investment inside this 500 hectares PNOC lot.

It will be recalled that during the time of President Marcos, he issued proclamation number 2478 on January 22, 1986, proclaiming 10.8441 hectares open for disposition in accordance with the provision of public land act.

The PNOC  then executed a waiver of rights in favor of the Republic of the Philippines, represented by Department of Environment and Natural Resources.

Gov. Garcia said PNOC ed over  the titles of the 10.8441 hectares To the DENR after 27 long years. The DENR in turn will do the processing of the lot to prospective owners.

“Now DENR will then process the individual titles for distribution to around 400 families in barangay Lamao,” Garcia added.

Also given merit for the successful reward of the lot to the beneficiaries was Mayor Ver Roque for his untiring efforts in supporting the claim (of titles) by his townmates.

“This is a breakthrough under the leadership of Mayor Roque,” said one of the beneficiaries.

But the beneficiaries said that so much struggle has happened before this event since  It began way back in 1955 during the time of Pres. Macapagal.

But many of the Lamaons never stopped in claiming this land while  a number of the occupants had already died.