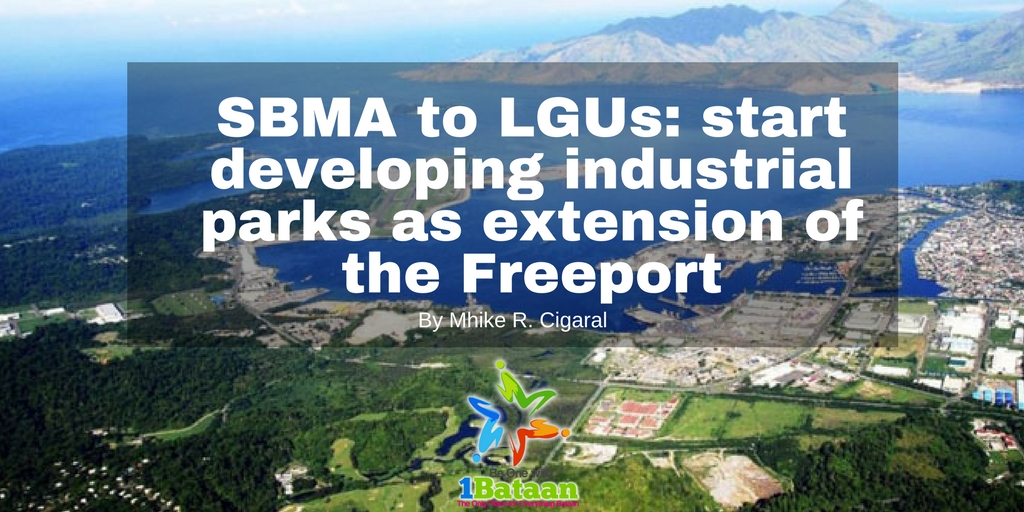 SBMA to LGUs: start developing industrial parks as extension of the Freeport

In a meeting with municipal mayors and other officials and members of the SBMA Board of Directors, SBMA Administrator Wilma Amy Eisma suggested that each contiguous local government unit (LGUs) should start developing industrial parks to accommodate local and foreign investors.

Eisma said there is practically no more land space available for new investors who are looking for large areas for their new facilities inside the fenced areas, compelling the SBMA to endorse them to other areas in Clark or Bataan and lose supposedly additional revenue for Subic. Fenced areas refer to vicinities formerly occupied by the US Naval Base.

The proposal to extend the fenced areas to contiguous LGUs is contained in Executive Order 675 which took effect as early as November 2007, amending EO97-A allowing local government unit officials, through the approval of the Sangguniang Panlungsod or Pambayan, to declare any part of their jurisdiction as additional secured areas or additional areas of the Subic Bay Special Economic and Freeport Zone (SSEFPZ) which shall be organized, administered, managed and operated directly by the SBMA.

She added that the extension of the fenced areas may not be implemented during her term, but it would be beneficial if the LGUs start drafting their respective master plans.

The SBMA Administrator urged the local officials not to wait for SBMA to act on it. “Please do not wait for us to act. The initiatives must start from the LGUs and we, in SBMA, are here to help and assist in planning,” she said.

Eisma lauded San Antonio Mayor Estela Antipolo who already started planning for the development of some 10,000 hectares of land and water areas which are to be converted into the San Antonio Economic Development Area that will form part of the extension of the Subic Bay Freeport Zone.

Through the San Antonio Sangguniang Bayan Resolution No. 13-080 which was passed in November 2013, parts of Sitio Silangin, Nagsasa and Talisayin, all located at the Redondo Peninsula will be granted tax and duty free privileges being an extension of the Subic Freeport.

SBMA is also expecting the same initiatives from the city of Olongapo, and the municipalities of Subic, Castillejos and San Marcelino in Zambales, and Morong, Dinalupihan and Hermosa in Bataan.

The LGU shares were derived from the five per cent (5%) of gross revenue paid to SBMA by locators and investors operating inside Subic Freeport. From the five percent GRT, three per cent goes to the national treasury, while the two per cent (2%) are distributed by SBMA among the eight LGUs for their community development projects including health, education, peace and order, and livelihood programs to enable these communities keep pace with developments in the special economic zone.

For the said semester, Olongapo City remains the highest recipient of the revenue share with P35.1 million, followed by the municipality of Subic with P22.96 million and Dinalupihan with P18.73 million.