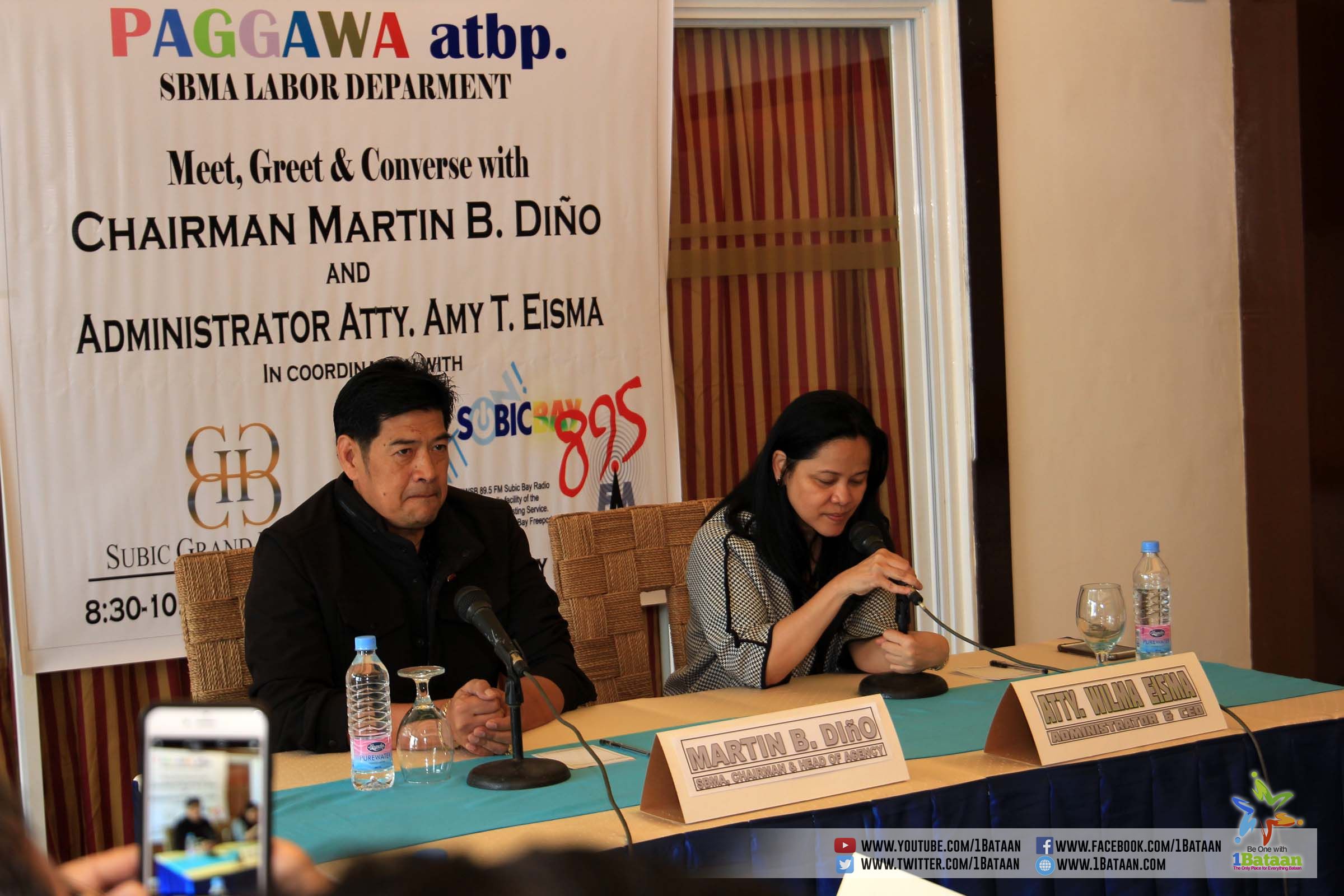 SUBIC BAY FREEPORT- The Subic Bay Metropolitan Authority (SBMA) has expressed its interest in extending its present fenced area to contiguous municipalities based on the provisions of the law.

This was announced to members of the Subic Bay Freeport Chamber of Commerce (SBFCC) in a meeting Wednesday (Jan 25) sponsored by the SBMA Labor Department in celebration of the 4th year anniversary of its SBMA-run radio program “Paggawa at iba pa” over 89.5 FM Subic Bay Radio.

SBMA Administrator Atty. Wilma Eisma told Subic-based businessmen that according to the provisions of Republic Act 7227, the law that created the Subic Bay Freeport Zone, “the fenced areas should be extended.”

Section 12 of RA 7227 states Subic Special Economic and Freeport Zone consist of the City of Olongapo and the municipality of Subic in Zambales, the lands occupied by the former US Naval Base and its contiguous extensions and within the territorial jurisdiction of the municipalities of Morong and Hermosa in Bataan.

Related to this, in November 2007, Executive Order 675 was issued by then President Gloria Macapagal Arroyo amending EO 97-A allowing the extension of the secured area of the Subic Bay Special Economic and Freeport Zone (SSEFPZ) to areas within the SSEFPZ but are outside the presently fenced-in former US Naval Base.

Under EO 675, SBMA may declare areas outside the former US Naval Base as “Additional Secured Areas” or “Additional Areas” which may be operated as “Special Economic and Freeport Zone” supervised by SBMA.

Additional Secured Areas and Additional Areas are entitled to all tax, fiscal and other investment incentives (except real estate tax for privately-owned property). However, only secured areas may avail the duty-free privileges.

The declaration may only take effect after a concurrence by a resolution of the concerned Sangguniang Bayan or Panglungsod.

“That’s the dream. Fencing outside the existing fenced areas is difficult but I think it can be done and it should be done,” Eisma said, adding that at the very least, the privileges provided to investors and locators inside the Freeport should be extended.

Eisma encouraged the locators and investors to share inputs or ideas with local government officials in the contiguous municipalities and city in a bid to expand their businesses in their areas. “Because at the end of the day, based on the provisions of the law, those areas or parts of those areas are actually part of the Freeport, she continued.

“It is very important to work with the local government units within the contiguous zone. So, we are now working on that,” she said.

Meanwhile, SBMA Chairman Martin Diño said the SBMA Board of Directors is now doing all the necessary steps to shorten the documentation process for new and renewing businesses in an effort to make Subic “investor and locator friendly.”

In response, SBFCC president Rose Baldeo said the member-locators and investors are with the new management team of SBMA saying the SBFCC is fully supporting the dream of the SBMA officials.

In the photo are SBMA Chairman Martin B. Dino and Administrator Wilma T. Eisma in an impromptu forum during the anniversary celebration of Paggawa Atbp. radio program of the SBMA Labor Department held at the Grand Harbor Hotel in Subic Bay Freeport.